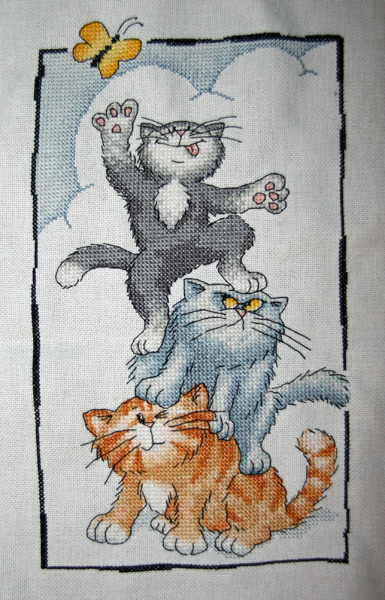 Update with a couple of pictures tonight, first we have the completed TeamWork,part of the Cats Rule series by Peter Underhill.  I like this one because it has a black and white cat in it although he’s not as grumpy as the one in the middle, I would have completed this a while ago but it took a back seat while I completed the birth sampler and because I had made a counting mistake that I just could not find.  After putting it aside for a little while it was easier to find the mistake and fix it, so now it joins the ‘waiting to be framed’ pile.

And secondly a new updated picture of Woodland Enchantress now with most of her bottom half done, the next step is to do some of the background and roll the picture up again so I won’t see this bit for a while once I’ve done that.  This one really does seem to be coming on very quickly there’s a few colour changes and confetti areas in the background, they usually slow me down a bit.  The actual finishing of this one is the bit I am dreading the most it has lots of french knots to be put on which isn’t really my favourite stitch so I’ll have to do lots of practice with those.

Once I’ve done this?  I’m not halfway through (yet) and I’m thinking about the next project, which is mostly because I’m feeling very guilty about a UFO (Unfinished Object, for the non-stitchers reading this).  It’s The Enchanter by Teresa Wentzler and it’s ridiculous that this one has slipped onto the unfinished pile, I think it only happened because Iwas doing it just before I took a break from stitching.  I really only have the border to complete and I think I’ve done about half of that; the main picture is stitched, backstitched and complete but I’ve got about half of the outside frame to do, more backstitch and beads.  I really, really should get it finished.

Detail is in the Backstitch