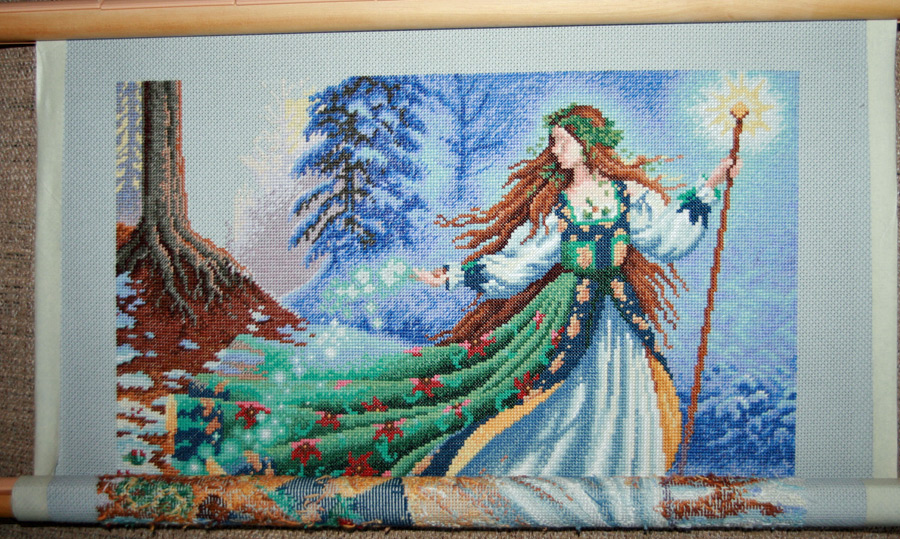 After a break from stitching to recover from my cold here’s a picture of it mostly done which is now out of date.

Yes I have finally finished the main stitching for Woodland Enchantress, as you can see from the picture I was pretty close to getting the last few stitches in anyway.  But it isn’t fully completed yet, just backstitch, couching (never done before), beading and the dreaded french knots to do; first though I’m going to take a break.  A lot of the couching is done with metallic threads and I don’t like to wash my work once metallics have been put on, I’ve also got some time off work coming up so I’m planning to use a whole day of that to get the finishing touches done.

In the meantime I’ve gone back to my UFO (UnFinished Object) The Enchanter – bit of a magic theme going on here – he’s be sitting unfinished for a while and I’ve only got the border to do, well I’ve only got half the border to do.  Lesson learnt over the weekend, make sure everything is put away, my poor enchanter has quite literally been gathering dust and either I used the wrong colours completely or the white and light grey have both morphed into a sort of peach colour.  When I got back into stiching again I made myself some bags to put my sewing frames in – nothing spectacular just some curtain lining (very) roughly machine stitched along two sides and with some corded rope put in at the top so I can pull it closed.  The lining is coated with something on one side, I think to keep the light out, because it isn’t regular fabric it’s very good at not attracting dust and cat hair so it makes a very good inside for the bag.  I had an idea of decorating it with small pictures that you get on magazines but I’ve been spending most of my time on big pictures since then.