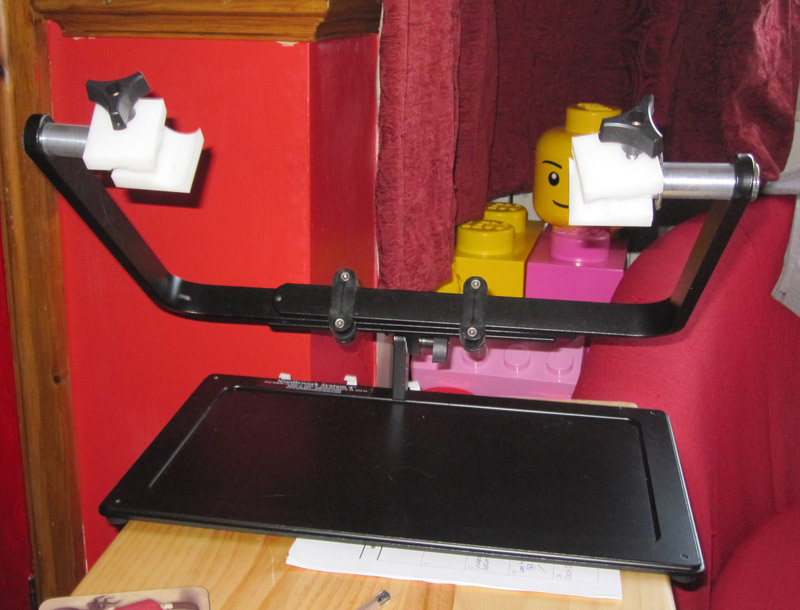 Just a quick update before I turn the pc off for the night.

First my new toy arrived safe and sound after a slight delay at customs.  It’s a System 4 lapstand and q-snap holder and I love it.  Seeing as I’d been getting on so well with my floor stand I decided to treat myself to the lapstand with the q-snap holder for working on my smaller projects.  The holder will fit onto my floor stand if I wanted to use it that way but I’m getting on so well with the current set up.  The lapstand comes with an extension piece but I haven’t found that necessary when I have it sat on my lap.  I think if I was using it on a table then the extension piece might be useful.  I can use the extension piece on the floor stand as well if I need too.  It’s an expensive system and it doesn’t help that I can only get it from the US so there’s postage on top of that and import tax if you’re unlucky enough to get it picked up.  But I have to balance that with the fact that I pretty much use either of the stands every day (almost every day) and I expect to get years of use out of it; so it’s a big investment but I don’t think I’ve ever been so happy with a stand and I’ve tried a lot of them over the years.

So as my new stand had arrived then it was only right that I spent lots of time stitching something on it so rather than swap back to Whispers I’ve been working on Couch Dragon and having so much fun that I’ve finished page 1.

I had already done the top half of the page but the bottom half stitched so much quicker once I wasn’t juggling the q-snap and trying to find a comfortable stitching position.  I enjoyed it so much that I’ve been really tempted to stick with it but then I got really guilty about the others I have started and not really having an organised way to spend time on each of them.  A screaming rotation doesn’t work when they’re all screaming.  So I’m going to let chance decide what I’m going to stitch.  I have a spreadsheet which will randomly select one chart from the four I have started, I then stitch a page on the chart that the spreadsheet (now known as the stitching fairy) selects.  Tonight I finished page 1 of Couch Dragon and the random chart selected is Computer Catastrophes so tomorrow night it will be back to my floor stand and page 4 of Computer Catastrophes.

See you soon for another update and thank you for the awards it’s lovely to know that you enjoy following my updates.  This one ended up a lot longer than I expected, goodnight everyone and happy stitching.

Kitty has a head

Tools of the Craft