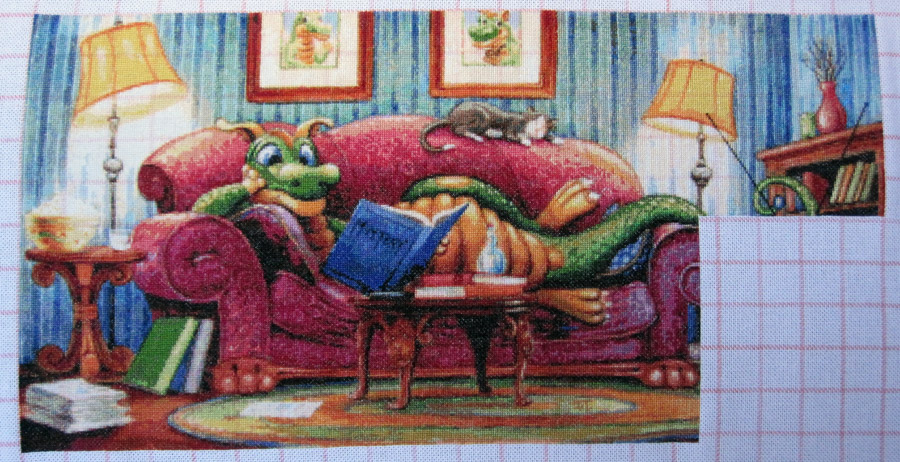 There’s something about getting towards the end of a project that makes time seem to drag.  After spending so long with him I should be used to each page taking two weeks to complete, after all there are a lot of colour changes going on in a small area and only so many hours in a day that can be used for sewing.  But on the other hand I don’t want to see him finished.  Once he’s finished I don’t get to spend hours sitting over him admiring the bright colours and noticing all of the little details.  When he’s finished and eventually framed he will be on the wall and mostly viewed from a distance.

But he isn’t finished yet and even with all of my concentration techniques it will still be a couple of weeks before he’s finished and being washed.  So I have two more weeks to stare at him and wonder how so many colours can be found in such a small place.  Two more weeks of grumbling under my breath about the rug that seems to slow my stitching down to a crawl.  And two more weeks of constantly changing my mind over what I’m going to focus on next.

Looking through my old posts I noticed my yearly goals which I had decided to abandon, even though I did over achieve on the goal for Whispers.  Well it seems that after I decided to ignore my goals I managed to get very close to actually reaching them mostly due to falling in love with Computer Catastrophes again.  I only have a page to stitch on that to reach my goal and half a page to stitch on Mini Lost in You for that goal.  So once Couch Dragon is finished I might have another look at those goals and see if I can actually hit them.

I may not do an update now until Couch Dragon is finished so it may be a couple of weeks until the next post.  Cross your fingers that my needles grow wings.