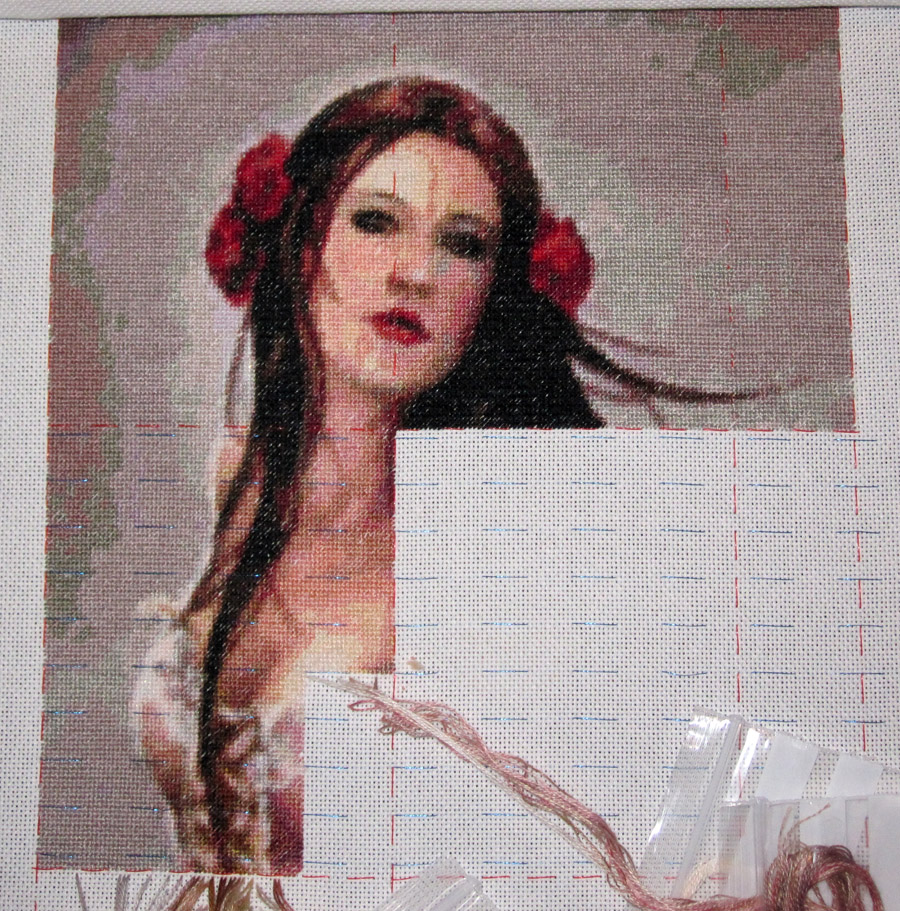 Last week I was back on Fairy Tales and I decided to give parking a try after having read up on the subject and reached a point where I understood it.  There’s all sorts of ways of parking your sewing so it’s mostly a matter of finding what works for you.

Parking is leaving your thread still attached to your sewing and working with another colour.  The thread not being used is parked in the position where it will next be used.  So you’ll need to be sure of your counting (gridding helps a lot here) because in areas with lots of very similar looking colours it’s easy to get lost.  On the other hand in areas of large patches of confetti stitches where your colours are here and there it should save you fastening off the colour constantly.

I began parking by stitching each 10×10 block of stitches in a row across the page and parking the thread in the block underneath.  It felt a little cramped with all of those threads so I began working in columns down the page but still keeping each one 10 stitches across.  It was really quick to stitch the blocks which were mostly background and only had two or three colours.  Then I got onto the confetti heavy columns (you’ll see it as the lacing on her top) each 10×10 block felt like it had fifteen or so colour changes but I think it would have taken me even longer had I been constantly finishing off the thread and adding a new one.

To keep the threads clean while they’re not being used I’m putting them into little grip seal bags which should also prevent them tangling.  I haven’t had any problems with tangles and knots in fact I’ve had less knots during the course of the week than I normally do.  Perhaps that’s another advantage.

I think I shall give the experiment a little longer it speeds up my sewing because the decision of what colour to stitch is made for me and I can usually spend ages planning in advance what colours I want to stitch next.  I don’t think I shall use parking on the Train of Dreams though because I’m using q-snaps for that so the parked threads might get in my way too much.

Too cold to stitch?