It was all going so well.

I’ve been making really good progress on Whispers and was getting to the point of deciding whether to start page 5 or to get back to Little Princess for a few days after the weekend.  So by Thursday I had decided that I was going to stitch whichever I wanted to stitch and I’ll swap between my projects based on which one I felt like stitching.  It seemed like a good idea at the time.

This is how Whispers looked on Thursday night

It still looks the same.  Because after Thursday came Friday and this new release Computer Catastrophes from Heaven and Earth Designs.  Friday night I had brought the pattern, printed the first couple of pages and was preparing the fabric.

This weekend I have been stitching Computer Catastrophes.  How could I resist?  The cat is so similar to Grumpy Cat who once put a whole paw into a glass of water as he clambered over my pc to get to the window so that he could look outside.  And I used to work on a helpdesk, I’m used to trying to figure out blue screen problems (just reboot it).  I’ve felt so guilty about starting yet another project, I really don’t like having too many on the go at once, but I don’t feel so bad now I’ve started.  Once the initial burst of excitement is over I’m sure I’ll split my time with the other projects.

In other crafting, my patchwork quilt is slowly coming along.  I have this mad feeling that I’m going to stitch through my finger which puts me off using a sewing machine although once I get started I’m fine, if a little uneven with my seams sometimes.  But I’ve been trying really hard with this patchwork and it’s coming along at the moment, still a long way from being put together yet but that’s because I can’t tear myself away from my cross stitch.  As a little distraction from the quilt though I made myself a q-snap cover, I think it looks ok considering it took me less than half an hour.

End Of The Row 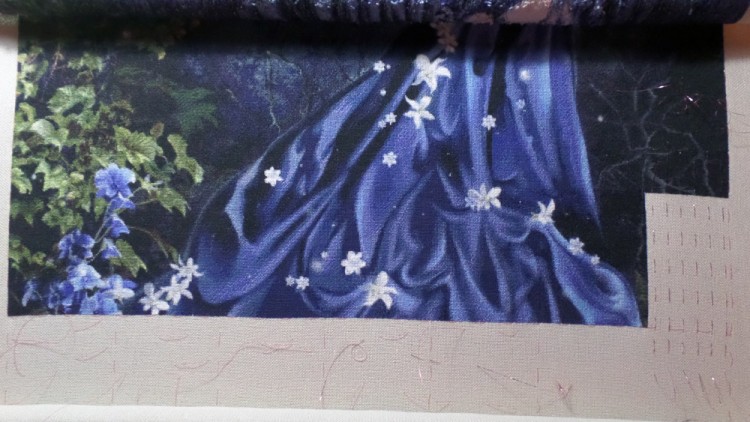