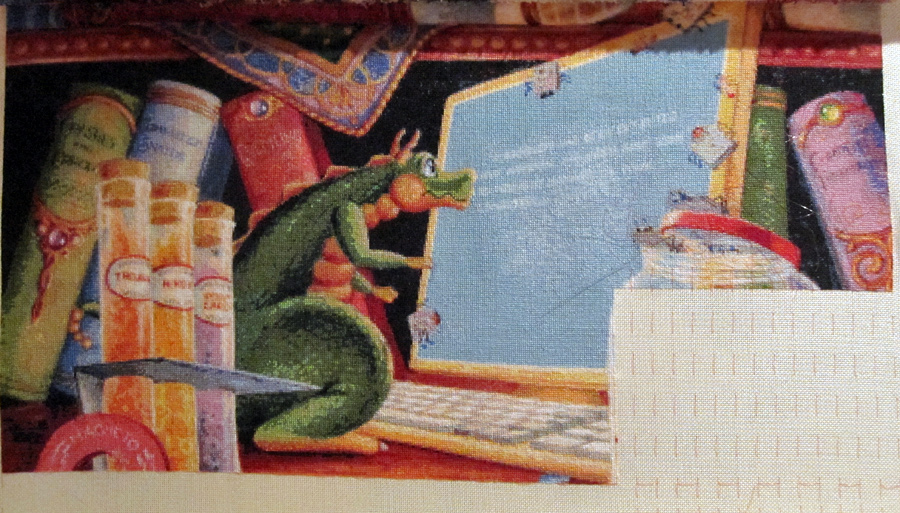 2014 is finally with us and I should really do a round up of stitching from 2013.  2013 was a year of progress for my stitching, I reached the halfway point with Whispers, a few pages on Eternal Promise and less than that on poor Snow Girl.  I finished Mini Lost In You which was an achievement as it had battled me so much.  I got a lot of knitting done as well which was a nice change in exercise for my fingers as well as providing some nice Christmas gifts.  I didn’t finish Computer Catastrophes though.  But I did have two new starts with QS Arthur and Into the Sea.  All in all I stitched 34 pages this year.

This morning I took a picture of my ort jar before emptying it ready for 2014 stitching.

I may not have finished Computer Catastrophes but to start the new year in the right way I finished page 22 today.  I made it through that blue screen and next up is the jar of computer bugs which will mean lots and lots of confetti.  It’s also the last full size page so I’m re-setting my goal, Computer Catastrophes will be finished this year.

I’m going to focus on Computer Catastrophes for now, working on the others as I need a break.  Once that is done the plan is to then focus on Whispers, it would be very nice to get another couple of rows of pages done on her this year.

Too cold to stitch?