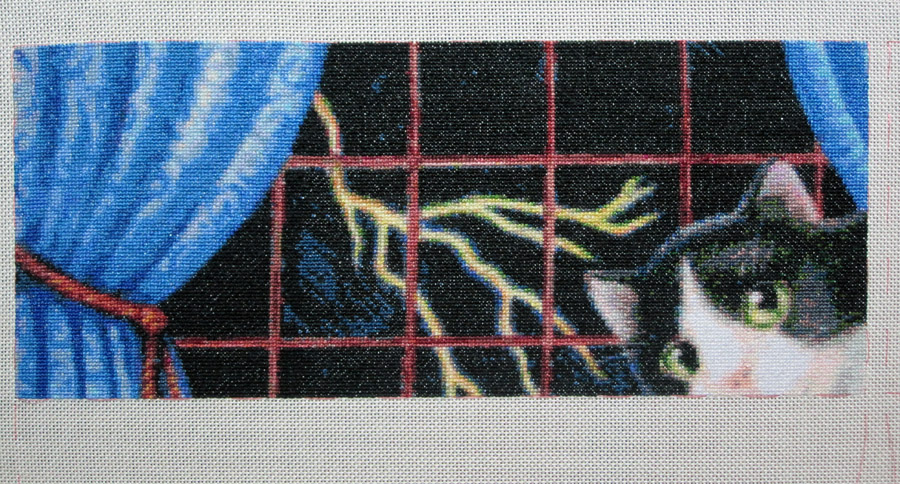 I was going to post an update yesterday but the stitching was going so well I thought I’d get the page finished before doing an update.

The cold corner problem has been solved with the aid of a nice little fan heater to take the chill away.  It’s worked so well the weather has been much milder so I’ve actually only used it once.  But it has allowed me to get back to Computer Catastrophes which I’m really happy about as I was getting on so well with it.  The cat is looking beautiful, lots of detail confetti stitching but that was such a welcome break after those blocks of black.  He’s looking a bit guilty as he’s knocking over a glass of water, I think I have that to look forward too in the next page.

That page will wait until I’ve done another two pages on Whispers.  I seem to be settling into a two page rotation apart from the odd week now and then when I’m a little later home from work.  I’ve decided those weeknights will be spent on Mini Lost In you as it’s much easier to pick up and put a few stitches in here and there.  I’m also looking at starting another sewing as this two page rotation seems to be going well and there’s a picture that I’ve been meaning to start for almost two years now.  I’m not going to start it just yet though, I’ve decided to wait until I’m on the second row of Computer Catastrophes which will put me on the third row of Whispers.  That way all three will be at different stages.  I’m also planning to stitch on the 25 count magic guide evenweave from DMC so the gridding will be done for me.  We’ll see how long I can actually hold off from starting.