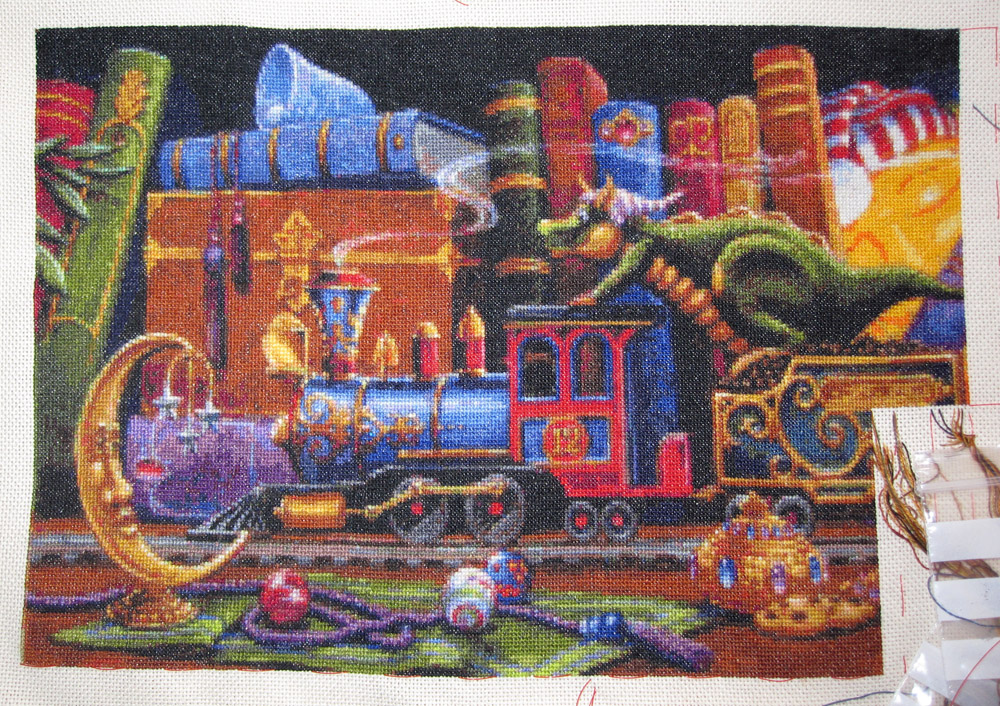 I missed an update last week.  I got myself into a bit of a tizz with my Train of Dreams, not with the stitching itself but because I couldn’t get comfortable sitting behind my frame.  It’s a very big 36 inch frame and when it’s on the floor stand it was quite uncomfortable, especially when it’s warm.  So I dug out my q-snaps and used those instead, then I was getting flustered by the tangle of threads on my needle organiser so I’ve had an equipment reductions and I’m feeling a lot happier with it now.  I had just less than a week on the train before the Sunny Stitchalong started again so it was probably good going to get three columns done.  Most of the sleeping sun is done now and it took ages because of all the confetti and colour changes in the hat, the dragon is nearly done too just a little bit of tail before he’s done.

This week I’ve been stitching the Sunny Storykeep.

I decided to concentrate on getting her face done because it’s a bright white.  I kept picking up stray bits of grumpy cat in my thread but thankfully it isn’t so noticeable  now I’ve begun to get the detail of her eye and hair in.  I think we get the next pattern page for the next stitchalong so I’m tempted to get the page finished before going back to the Train.  Sunny is being stitched on q-snaps too, I was looking at the grime guards you can get for them to hold the excess fabric and keep them tidy but I’ve only seen them for sale in the US so I’ve decided I’m going to make my own and I think I can work out how to make one.  I’ll keep you posted on my progress.