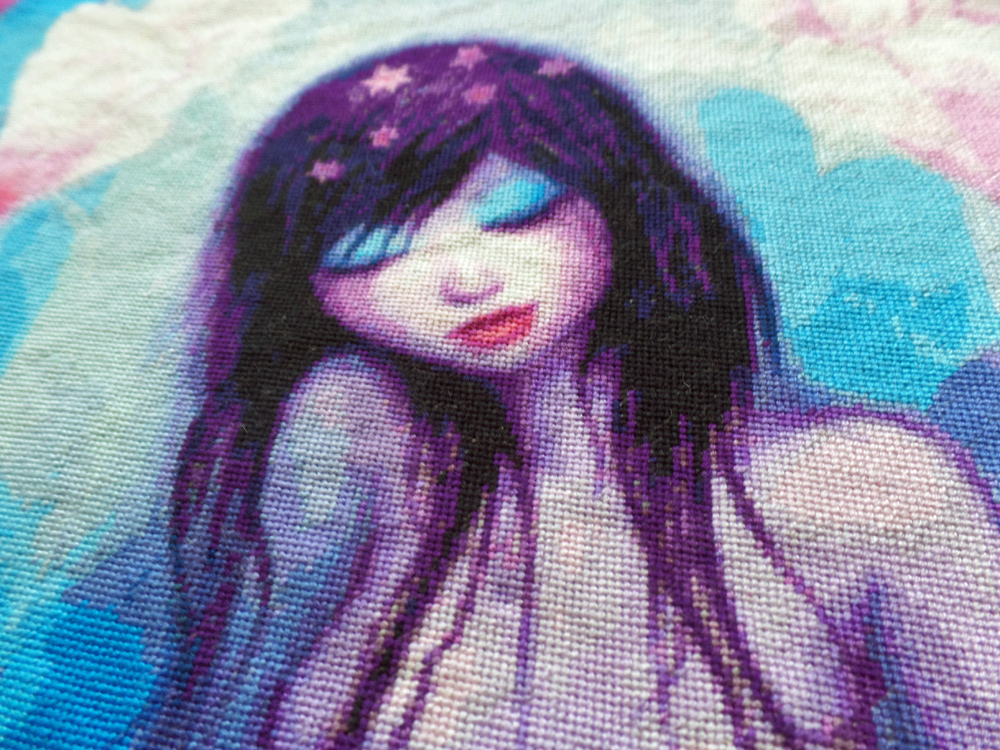 Yes I finally have my finish, after a lot of distractions and interruptions.  I started her in 2013, not sure of the exact date possibly early November or October sometime.  It was a project that I was working on during lunchbreaks at work and taking it home for the occasional weekend until I got worried that it would get too dirty and it remained at home getting worked on occasionally for the odd page here and there.

It was an experiment in tent stitching and while I enjoyed how quickly I could get through the blocks of colour it did find it frustrating to count in places and even though I used two strands I felt that my overall coverage is better when I stitch full crosses with one strand on 25 count.  Also I think that the fabric has warped slightly because of the direction that the stitches pull, my framer should be able to sort it out but I don’t think I’ll be stitching this way again.

I also had a bit of a panic when it was time to wash her.  The only pieces I don’t wash are those that have hand-dyed fabric or threads.  As this was stitched on magic guide fabric I had to wash it.  I don’t use a lot of Anchor thread but when I have I haven’t had any problems but one of these blues worried me so I used a colour catcher in the bowl of hot water and it was a good idea to because after a while the water began to turn blue.  Luckily nothing ran onto the white and none of the grid lines are showing through the stitching.  I can still see some ghosting of the lines on the fabric but that isn’t a worry because it will be covered by the framing.  I couldn’t risk leaving it soaking any longer because of the dye run.

This would be a good piece for anyone wanting to do a full coverage project without having to deal with a lot of confetti, the most confetti is in her face but that is only one page.

I’ve managed to get a lot of stitching done since the beginning of the year to get her finished.  It doesn’t take me so long to get through projects when I concentrate on them so I’m going to try to concentrate more often.  I’m going back to gamer now and I have 24 pages to complete on that project.  That piece has a lot more confetti in it and I do like to have breaks from it.  Instead of an organised rotation I’m going to focus on this one but most likely take the odd day or two as a break to work on something smaller that doesn’t need so much concentration.